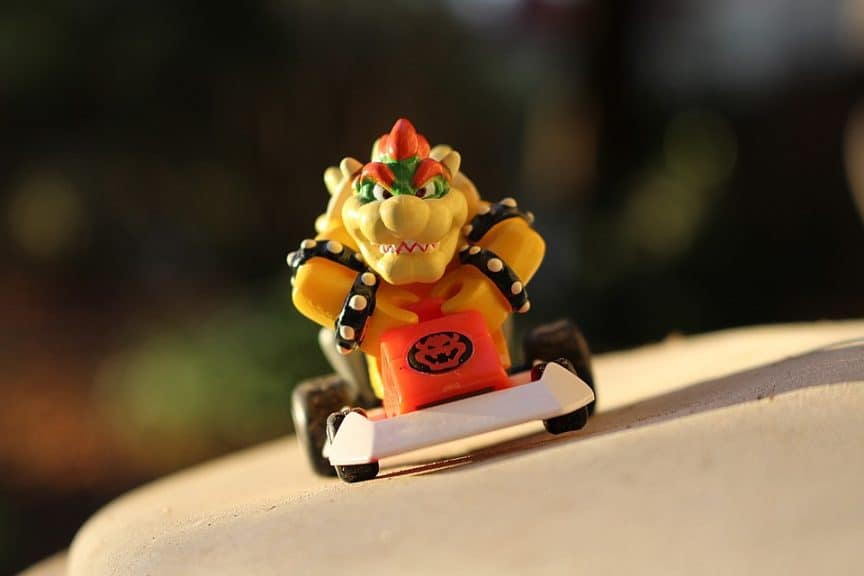 What started as a simple game from Nintendo, over time has become an icon in pop culture. The Mario franchise began with Super Mario Bros. released in 1985. Since then it has spawned many games in different genres. These include the RPG Paper Mario, sports games like Mario Tennis, and probably the biggest spinoff game of the series Mario Kart. Launched in 1992 Mario Kart has been a fun and over-the-top take on the racing genre. Now, with the Mario Kart Arcade GP VR, you get to be on track with the famous plumber and his friends.

Do More Than Drive with Mario Kart Arcade GP VR

Ever since it launched back in the 1980s, Mario Kart has been a smash hit. It is like the MiniGolf of the racing game genre. It takes the premise of a car race an then makes it into the craziest and most over the top experience. The virtual reality(VR) version stuck with that. The game still has the charm of the console versions with the wild tracks and fun power-ups.

Players take control with the specialized arcade chair and the VR headset powered by the HTC Vive. To help bring the VR vibe to the gameplay the chair moves along with your in-game car. But, the real treat is the motion sensor wristband that allows you to throw banana peels and other power-ups.

With how popular the franchise is, assuming a worldwide release is not crazy. But, as of now, it is available exclusively through BANDAI Namco’s VR Zone arcades. The game was made available sometime in 2017 and has since popped up in other branches, while still being limited. The game is currently playable in Japanese and UK branches. Plus, limited time access at the VR Zone Portal in Washington D.C., USA.

A lot of reasons can be attributed to these including the production of the equipment to play the game. Still, if you want to experience it, the game allows for the simultaneous play of up to four players letting you race with your friends.

The VR Zone arcades are not limited to just this one game. In fact, it is your one-stop shop for an all-around VR experience. It has a variety of games including franchise games like Dragon Ball VR. Then there is the wildly exciting Ward Escape Omega which is an innovative horror game. The games in here might not be the cheapest, however, if you are someone who just wants a VR experience they are worth it.

Still the Mario Kart you Know and Love

Mario Kart Advance GP VR is a game that truly showcases the future of video games. It has amazing graphics while at the same time letting the player be immersed in the racing experience. Having seen gameplay footage of the game, it does not sacrifice the mechanics of driving nor does it cut back on the cartoon charm.

Even in the game trailers, people get an idea of how the game will be. The crazy obstacles are still there; power-ups are still as frustrating as ever. Before, you only see what being slowed down by a banana peel feels. Now, you get to steer and skid along when you get hit with one. You need sharp senses when you drive as the obstacles are still unforgiving. Also, you get to know what Mario felt like having to drive around while aiming a red shell with his right arm.

Powered by the HTC Vive

This item has been noted before in this article, and for a good reason. The HTC Vive is what helped make this game possible. It is a virtual reality system made in part by HTC that allows its users a deep and immersive VR experience. This system can track a 15×15 sized room allowing players a wide area of play.

It has a precise 360-degree controller and headset tracking letting the user get the most gameplay. But, even if you are playing in a virtual space, you don’t have to worry about hitting anything. The HTC Vive comes with the Chaperone system that warns you of any obstacle or boundary you are to encounter. Yes, this system is immersive but, it is also safe.

The Next Generation of a Strong Franchise

Yes, the Mario Kart series is the racing spinoff of the famous Super Mario Bros. series. There is an argument that at this point it is it’s own franchise with a strong and dedicated following. Mario Kart has been the game that friends played in their home during the boom of consoles. It has stood the test of time through the handhelds. All while still having a presence in the actual arcades.

Doing a quick retrospective of the series gives us a lot about the legacy of this racing game. It started as a go-cart spinoff of Mario. With Mario Kart 64 it introduced 3D Graphics plus four-player races. Super Circuit for the Gameboy Advance introduced unlockable retro tracks. Double Dash on the game cube gave the world the two player carts. With Mario Kart DS players got a taste of the dual screen gameplay, plus multiplayer through Wi-Fi.

Moving on to Mario Kart Wii, players got the massive 12 player race, motorbikes, and the revolutionary motion controls. Mario Kart 7 & 8 for the Nintendo 3DS and the Wii U respectively game players a ton of new features. Including some that are in the VR game. These games gave players hang gliding, submerged karts, vehicle customization, anti-gravity races, first Person perspective, and HD graphics. That is not even all of what they brought to the table.

Mario Kart Advance GP VR is not your ordinary VR game. Despite the limited release, it is still the first entry of a beloved series into the next generation. From what we have seen, the game lives up to the fun and excitement its predecessors brought, and that is as good as any place to start.